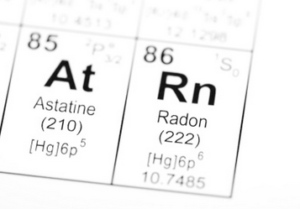 The entire state of Iowa is considered at high risk for radon gas in homes by the EPA. High levels of radon can be found in any type of home, so it is important for everyone to test their home.

The Iowa Radon Survey has indicated that Iowa has the largest percentage (or 71.6%) of homes above the US Environmental Protection Agency action level of 4pCi/L. It is also designated by the US EPA as an entirely zone 1 state, which means that at least 50% of the homes are above US EPA’s recommended action level. 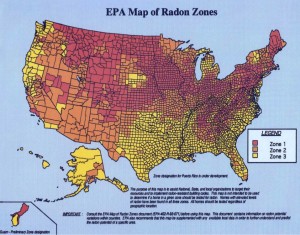 Where Does Radon Come From?

Radon-222 is the decay product of radium-226. Radon-222 and its parent, radium-226, are part of the long decay chain for uranium-238. Since uranium is essentially ubiquitous (being or seeming to be everywhere at the same time) in the earth’s crust, radium-226 and radon-222 are present in almost all rock and all soil and water.

Iowa has the highest average radon concentrations in the United States. In addition, women in Iowa tend to move less than most other states, which makes calculation of their past radon exposure easier. Additionally, Iowa has a quality National Cancer Institute SEER cancer registry, which helped identify women who developed lung cancer. Close to 60% of the basement measurements for both cases (participants with lung cancer) and controls (participants without lung cancer) exceeded the EPA’s action level. Twenty-eight percent of the living areas for the controls and 33% of the living areas for the cases exceeded the EPA’s action level of 4 pCi/L.

How Does Radon Get Into Your Home?

Warm air rises, creating a small vacuum in the lower areas of a house. Radon moves through and into the home as air moves from a higher pressure in the soil to a lower pressure in the home. Radon gas seeps into a house the same way air and other soil gases enter: from the soil around and under the home and through cracks in the foundation, floor or walls; hollow-block walls; and openings around floor drains, pipes and sump pumps; and through crawl spaces.

Can radon get into a new home?

Radon-resistant construction techniques can be effective in preventing radon entry. When installed properly and completely, these simple and inexpensive techniques can help reduce indoor radon levels in homes. In addition, installing them at the time of construction makes it easier and less expensive to reduce radon levels further if these passive techniques don’t reduce radon levels to below 4 pCi/L. Every new home should be tested after occupancy, even if it was built radon resistant. If radon levels are still in excess of 4 pCi/L, the passive system should be activated by having a qualified mitigator install a vent fan.

Why should I test my home? EPA estimates that radon causes thousands of cancer deaths in the U.S. each year

How does Radon cause cancer?

Radon, the number one cause of lung cancer in nonsmokers, decays quickly, breaking down into tiny radioactive particles that, when inhaled, can damage the cells that line the lung. Long-term exposure can lead to lung cancer.

Although there are no immediate symptoms, long-term exposure to radon can cause cellular damage in the lungs that can lead to lung cancer.

The United States Environmental Protection Agency, Surgeon General, American Lung Association, American Medical Association, and the National Safety Council recommend testing your home for radon because testing is the only way to know if your home has radon.